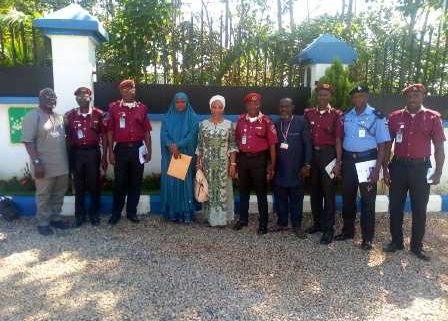 Episode 37 of the SERVICOM Help Desk Radio Programme held on the 30th October 2018 and it featured the Federal Road Safety Corps (FRSC).

After the necessary introductions the National Coordinator/Chief Executive of SERVICOM Mrs Nnenna Akajemeli, said FRSC was brought to the studio to enlighten Nigerians and the general public on issues bordering on their safety on the road.

Mr Jonah said responsibilities of the Corps include informing citizens on how to use the road and carrying out road audit, explaining that the corps works and consults with many agencies and the private organisation in realising its mandate.

He reiterated the need for drivers to have their driver’s license, and noted that while the Corps produces number plates, it is only the V.I.O that has the mandate to issue them to applicants.

Mr. Jonah said the FRSC rescues passengers in the event of accidents and calls the Police if the passengers are burnt beyond recognition, adding that village heads of the communities where the accident occurred are also contacted for their consent before burial. Next of Kin of victims, according to him, are also contacted through the vehicle manifest.

Mr James Mbatse said FRSC prevents accident and when it happens and people are burnt beyond recognition, they make wide consultation and don’t just rush to bury the victims. Based on the reported Peace Mass Transporter’s incidence, he said the Corps was still investigating the matter and disciplinary measures would be taken.

One Hajiya Rabi Abubakar lodged a complaint against the FRSC that her vehicle was impounded and alleged that the situation had led to the collapse of a bakery business she invested ten million naira on.

Mr Jonah said that even though government actually asked that speed limiter be installed in commercial vehicles to avoid over speeding and eventual accident; the matter will be investigated and resolved.

The N.C promised to send her staff along with the Road Safety team to the FRSC headquarters to have the matter looked into. She also thanked the Ordinary President and encouraged citizens to speak out when they experience service failure and ask for a SERVICOM unit in that MDA.