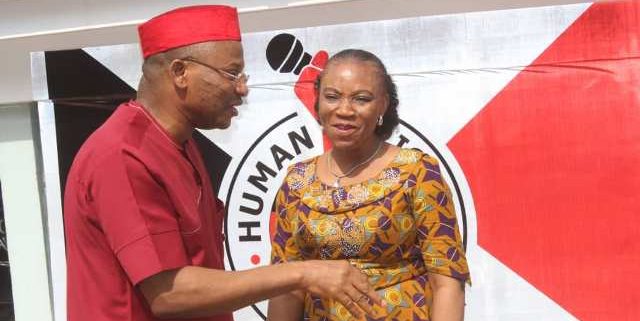 Episode 60 of the SERVICOM Help Desk Radio Programme which held on the 26th of March 2019, featured the Teachers Registration Council of Nigeria (TRCN). The National Coordinator / Chief Executive of SERVICOM, Mrs. Nnenna Akajemeli, appreciated the Ordinary President and the Brekete family and the TRCN Registrar Prof. Josiah Ajiboye who was personally in the studio with his Staff for the programme.

Prof. Ajiboye who thanked the SERVICOM Office and Ordinary President for the platform, said TRCN was established in 2004 to regulate the teaching profession in Nigeria, which had regrettably become an all comer’s affairs, as people without job are just advised to go and manage teaching.

“To regulate the teaching profession, government had to put this body in place and we are very serious with what we are doing now. Government has given a deadline of December 31st 2019 for all teachers to be registered and licenced by TRCN or else they will be removed from the class room by next year”, he said.

He said teachers are nation builders, who teach while others learn, noting that their importance called for a professional body as is obtainable in other professions, so as to weed out quacks and check against misconducts.

“By law, our mandate covers both government and private sector so we have conducted monitoring in the Six geo-political zones and we have concluded on those who have registered and are qualified”, TRCN Registrar disclosed.

Ordinary President raised the issue of the sack of teachers by the Kaduna state Government after an examination was carried out on them, to which the TRCN Registrar said the Council had conveyed its reservation to the state Government, as only the Council has the power to conduct exams for teachers.

Teachers have appealed that they will no longer take exams from anybody except TRCN, we organise the professional exams twice in a year in May and October and we have introduced Computer based tests so that teachers can be computer literate and you must pass the exam to be given a licence”, he said.

“We work in alliance with NUT to make sure teachers are not owed their salaries, and we pay advocacy visits to state government that owe teachers, we have Teachers Tribunal and Investigative Council where we take cases of misconduct to and we withdraw licence of teachers who are found wanting”, Prof. Ajibola explained.

Public Awareness Manager Ms. Patience Musa who gave feedback from intervention of SERVICOM on some complaints said, Airtel Network has advised one Mr. Emmanuel Orjika to go to court with his complaint against them, to which the Ordinary President said he would personally engage the Chairman of the Nigerian Communications Commission NCC for his intervention into the matter.

On the case of non-release of National Diploma certificate for one Miss Blessing Onu by the Delta State Polytechnic Ozoro. Ms. Musa said the SERVICOM Office was awaiting official position of the National Board of Technical Education and would convey to Brekete Family as soon as it was received, explaining that the response period for NBTE was yet to elapse.

Highlight of  Episode 52 of the SERVICOM Help Desk Radio  Programme.

Highlight of Episode 61 of the SERVICOM Help Desk Radio Programme.
Scroll to top