The Federal Government has tasked the Management and staff of the Federal Capital Territory Administration (FCTA) on positive work ethics to attain citizens-centered Service Delivery in Nigeria.
This charge was given during the flag- off ceremony of the FCTA SERVICOM Day Celebration by the National Coordinator/ CEO SERVICOM, Mrs. Nnenna Akajemeli, with the Sole objective of promoting service excellence in the FCT during the weekend.

In her paper presentation titled Work Ethics and Code of Conduct of Public Servants, the National Coordinator, highlighted that the Federal Government wants to make a difference by creating a cultural awareness of positive work ethics which is the collection of all values and actions appropriate in the work place.
The National Coordinator advised Public Servants to work effectively and efficiently in order to achieve the objectives of their institutions cost-effectively and in the public’s interests.

She added that the main objective of “Code of Conduct” is to ensure public accountability by public officials and that every Public Servant as well as Public Office holder in Nigeria is expected to abide by the provisions of the Code of Conduct as stipulated by law. 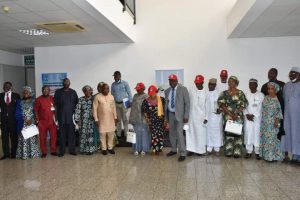 The code of conduct she said is the overall objective to ensure public accountability by Public Officials.
The permanent Secretary of the Federal Capital Territory Administration (FCTA), Mr. Olusade Adesola stated in his welcome address, that this celebration is a clear manifestation for the FCTA, geared towards rendering effective and efficient services to Nigerians.

He called on public servants to be diligent and responsible in the discharge of their duties and to remember the Code of SERVICOM at all times, by ensuring that services are rendered in a timely, fair, efficient and accountable manner.
He called on the SERVICOM team to replicate the SERVICOM Day initiative across all the Secretariat Department Agencies (SDA) in the FCT as the FCTA administration would soon commence a maiden edition of staff awards and recognition.

FCTA he said, would reward staff and push for more commitments in services rendered across board. He reiterated that, delay and sloppiness will no longer be tolerated, rather officers should imbibe the culture of working out their work ethics in order to attain excellence in their service delivery drive.