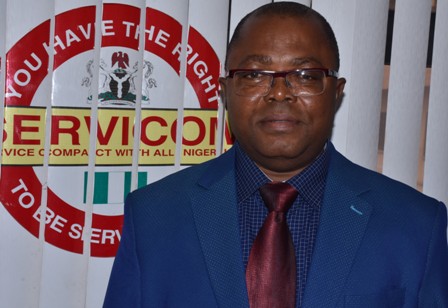 Mr. Okunade Solomon Kayode Is the Head of Accounts unit SERVICOM Office, presidency and a native of Tede in Atisbo Local Government Area of Oyo state who was born in the year 1961.

He started his Educational Career from Baptist primary school Tede, Oyo state where he obtained his First School Leaving Certificate (1969-1974).

Mr Okunade S. Kayode studied at the Polytechnic Ibadan for his National Certificate in Education technical, NCE {Mathematics & statistics) 1984 to 1986. He later gained admission into the University of Lagos where he obtained his BSC in Accounting between 1994 and 1998.

He also moved to pursue his Master in Business Administration (MBA) at The Ahmadu Bello University (ABU), Zaria (2010).

He worked briefly in the Consolidated Department of the Office of the Accountant- General of the Federation between 2000 and 2002.

However he was posted as a Senior Project Accountant to National Agency for the control of Aids {NACA).

In December 2010, he was posted to the Office of The Head of Civil Service of The Federation and later to the Nigeria Police Force Plateau state Command Jos, as Head of Internal Audit Unit (2014-2018).

He is happily married with wife and three children.