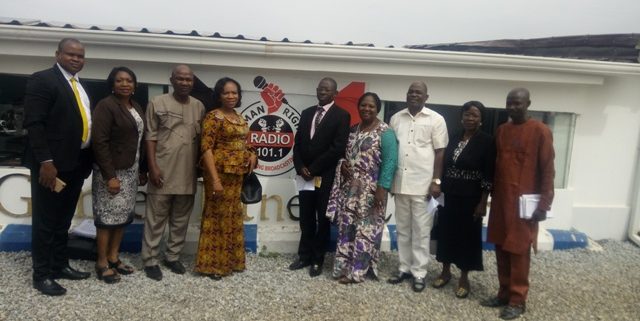 She also appreciated Chief Executive Officers of Ministries, Departments and Agencies (MDAs) for their support and approval of their staff to feature on the Programme where a lot of harvested feed back have helped in continuous improvement in services of the MDAs, saying “this has helped in  touching the lives of Nigerians, many people have had their complaint resolved by coming to us. We are glad that we are connecting government to the people through the services the MDAs render”.

She described the word TEAM as “Together Everyone Achieves More” noting that the Team work in the course of the SERVICOM Radio Programme has brought about verifiable achievements and impact in the lives of hitherto helpless citizens.

The Public Awareness Manager, Ms Patience Musa while giving  feed-back on some complaints received by the Office, said that the National Pension Commission had informed the Office that delay by the Federal Government to release funds into the Retired Benefits Bond Redemption Fund (RBBRF) Account with CBN was the main reason why a complainants like  Mr Okanlawon Jose Ejuwa, a retired employee of Federal Ministry of Mines and Steel Development as well as others who retired at the same time are yet to be paid.

She explained however that PENCOM  has given as assurance that the payment would soon be made within the next two weeks as the Federal Government recently released a mandate into the RBBRF Account.

On the case of non-release of certificate of Blessing Onu by the Delta state University Ozoro, the awareness Manager said NBTE had officially  informed the SERVICOM that there were discrepancies in the claims and documents of the   complainant. The National Coordinator who said she led a Team to NBTE Headquarters last week on the matter, gave an assurance that the Board will feature in the programme to substantiate their stand and position.

The NIPOST representative and General Manger Corporate Affairs,  Mr. Alao Franklin, who was appreciative of the opportunity provided by the SERVICOM Help Desk Programme, said a lot of innovations have being introduced into the service to match changing trends and technology.

He explained that the Nigerian Customs Service officials are in their offices for incoming so they can assess items in order to ensure there’s no contrabands, adding that while NIPOST only charges service fee on  the items, the Customs Officers are responsible for billing the items.

Mr Franklin said the innovations in NIPOOT involve collaboration with other Agencies such as FRSC , Banks, etc who are leveraging on the wide spread of NIPOST across the country to reach out to service takers. The Ordinary President said NIPOST should come again to enlighten Nigerian more about their new products and services.

Highlight of Episode 67 of the SERVICOM Help Desk Radio Programme.

Highlight of Episode 69 of the SERVICOM Help Desk Radio Programme.
Scroll to top