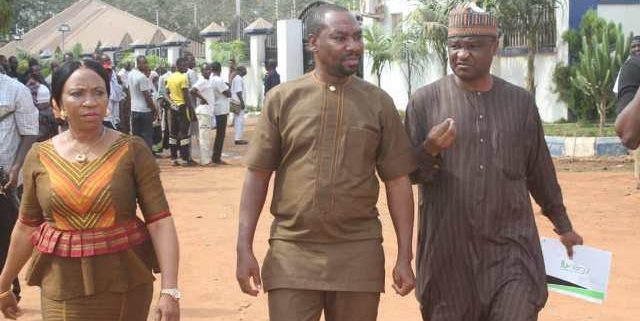 Highlight of Episode 50 of the SERVICOM Help desk Radio Programme

Episode 50 of the SERVICOM Help Desk Radio Programme held on the 5th of February 2019 and featured the National Office of Technology Acquisition and Promotion (NOTAP) with the Director General, Dr. Dan Azumi Mohammed Ibrahim in the studio.

After the appreciation of the National Coordinator and Chief Executive Officer of SERVICOM Mrs. Nnenna Akajemeli, the Director General of NOTAP Dr. Dan Azumi Mohammed Ibrahim explained that his office was set up to regulate inflow of foreign technologies Into the country.

He noted that more than 90% of technologies powering various sectors in the Country were imported, saying the implication is that the country invests lot of money in the purchase of foreign technologies thereby creating job opportunities for foreign nations rather than its citizens.

He also added that technologies meant to be sustaining the country are expected to be generated from Nigerian higher Institutions and Research Institutions, noting with regret that most of these Institutions don’t do in-depth researches that would translate to products and services.

“NOTAP is by mandate required to facilitate such innovations and technologies as well as provide intellectual patency to inventors, “ he said and urged Nigerians to also consult his Office before signing any business agreement with foreign partners.

Owing to the need for citizens to be more enlightened on how they can benefit from the services of NOTAP, the anchor of the Programme, Ahmad Isah A.K.A Ordinary President, requested that the DG NOTAP should be in the studio on Saturday for an exclusive session, to which the DG consented.

Highlight of  Episode 52 of the SERVICOM Help Desk Radio  Programme.
Scroll to top