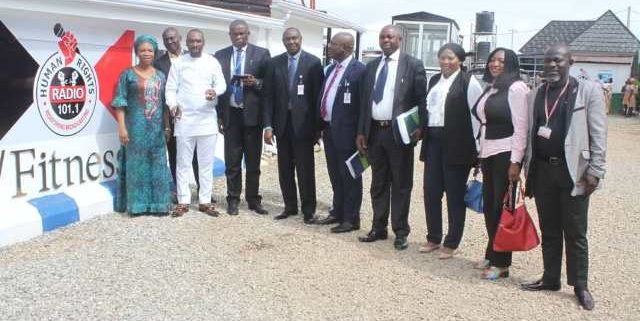 Episode 33 of the SERVICOM Help Desk Radio Programme held on 9th October 2018 and was  focused on the National Agency for the Prohibition of Trafficking in Persons (NAPTIP) with major discussion  on issues bordering on human Trafficking.

The National Coordinator of SERVICOM, Mrs. Nnenna Akajemmeli while introducing the discussion for the day, noted that the SERVICOM Office has been able to constructively engage service providers and service takers through the SERVICOM Help Desk, a development that has caused many citizens to appreciate Government Agencies.

Reacting on allegation of rampant trafficking of young girls through Abuja and Lagos Airports to other countries like Saudi Arabia, a Director from NAPTIP said the Agency was constrained in extending its operations in the Airports and Borders by the law establishing it.

He explained however that arrangements had reached advanced stage between the Agency and Management of the Federal Aviation Authority of Nigeria (FAAN) to allow NAPTIP establish Desks in Airports for surveillance, adding that a Memo was before the Federal Government for a review of NAPTIP Act, to expand its scope to Airports among others.

He said NAPTIP’s advocacy to the Minister of Labour has stopped the issuance of certificate to some recruitment Agents that carry out questionable employment for jobs abroad.

He said as an Agency NAPTIP had Zero tolerance for staff involvement in aiding and abetting human trafficking and disclosed that  6 NAPTIP officers were recently dismissed from service for compromising on their duties.